•    Limited run of 225 examples for global customers, available in SA for the first time 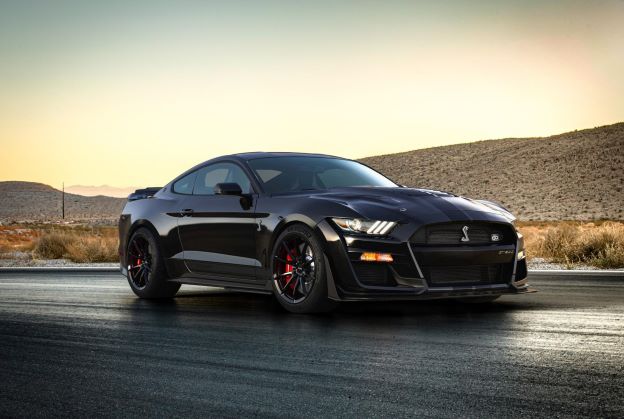 •    Based on the GT500, the new Shelby upgrades are suited to track driving

The Shelby Mustang King of the Road is one of the most famous models to bear the Shelby name and is making a return this year to honour the company’s 60th anniversary.

A limited run of 225 units globally of the Shelby King of the Road is currently underway, with Shelby South Africa aiming to complete four of those between 2023 and 2024 as part of the local allocation. Shelby SA has already sold one of these highly sought-after models, with each one being built at the Shelby-approved modshop, situated in the Western Cape. 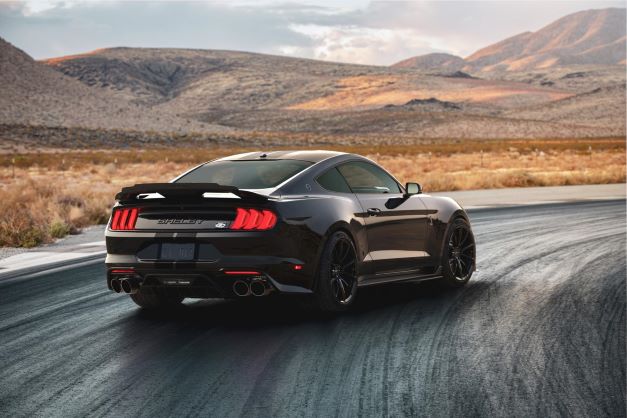 “Customers looking for the latest in personal expression and power are going to be rewarded by what the latest GT500KR has to offer,” says Doreen Mashinini, General Manager for Marketing at Ford South Africa. “This is the first time that this exclusive model is available for Mustang enthusiasts in South Africa, and epitomises everything that Carroll Shelby stood for,” says Mashinini.

Shelby founder Carroll Shelby was often called the ‘King of the Road’ for his ability to push the performance envelope, and this is only the third time in history that a version of the Shelby GT500 has carried the King of the Road name.

The first time was in 1968 when the Shelby GT500KR was powered by the 428 Cobra Jet V8 that was conservatively rated at 250kW. It was equipped with a modified suspension, redesigned front and rear end, custom fiberglass hood and Thunderbird taillights. Shelby added a functional roll bar and wood-rimmed steering wheel. Offered in both fastback and convertible, Ford dealers sold 1 570 GT500KR models in 1968 (1 053 fastbacks and 517 convertibles).

In 2008, Ford and Shelby brought back the GT500KR. Its supercharged V8 produced 402kW (30kW more than the standard GT500) and added a short-throw shifter, 3.73:1 rear axle and unique wheels, tyres, and tweaked suspension settings. A special composite hood with push button hood pins, unique stripes and badges distinguished this KR. A total of 1 000 cars were produced that year; demand was so great that Ford and Shelby agreed to build an additional 712 cars for 2009. 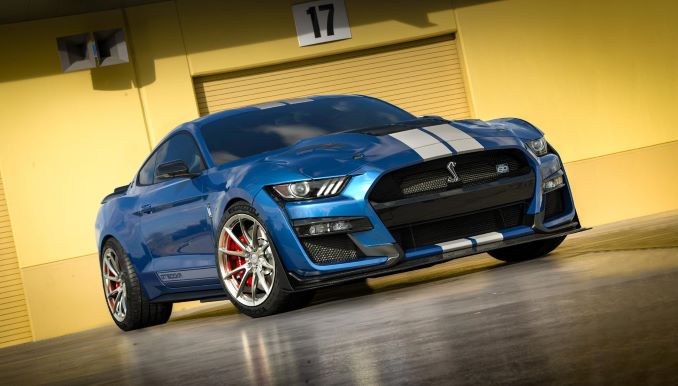 This third generation of the Shelby GT500KR – and the first to be offered in the right-hand drive Mustang – lives up to its KR badge by raising the horsepower to around 900hp (670kW) while sharpening the looks and handling. The combination results in the most extreme and refined Shelby KR to date – and places a stronger emphasis on track racing than the standard Shelby GT500.

Peter Lindenberg, CEO of Shelby South Africa, says that the KR is probably the most unique of all Shelbys available in SA because of the extremely limited numbers and power under the hood. “The GT500KR’s performance figures are unsurpassed for a rear-wheel drive muscle car. This is a long-awaited Shelby for the South African market as the enquiries for the high-performance, track-bred GT350 and GT500 have been extraordinary. This is the first time we are able to offer this icon in the Shelby range in South Africa,” says Lindenberg.

By upgrading the supercharger and coolers on the 5.2-litre V8, power has gone up by 105kW to a total output of approximately 670kW. If that doesn’t grab your attention, the lightweight carbon fibre hood, a saving of close to 14kg, and new alloy wheel design certainly will. Cornering agility is also improved thanks to a more aggressive suspension tune and sportier sway bars. 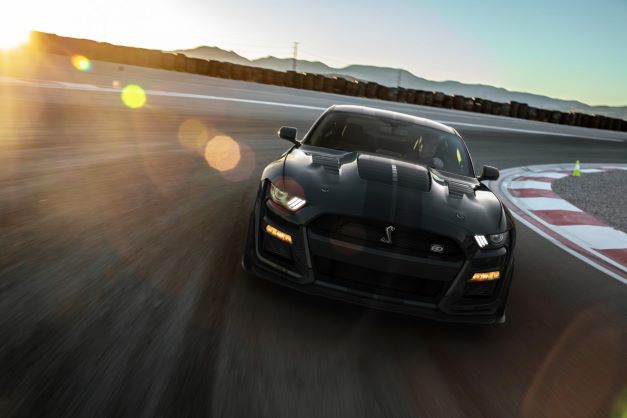 Inside, the GT500KR receives unique anniversary badging and each car includes membership of Team Shelby, the worldwide club Carroll Shelby established in 2008. Every vehicle is further documented in the official Shelby Registry alongside other rare Shelbys like the recently unveiled Shelby Speedster.

Wolf Racing Cars unveils its plans for the new factory


Wolf Racing Cars announced today the start of the construction of the new headquarters. The process is expected to last 18 months.The constructor has been forced to think about a new structure earlier than expected as it filled up all the space availab more >>


Lamborghini – Beyond the Concrete, photos


Lamborghini – Beyond the Concrete, photos

Maserati presents Project24. A project (referred to by a codename) of a limited series of super sports car – only 62 units – to raise the brand’s unlimited performance to a new level of adrenaline on the track. The truly extreme track-only car more >>


All-New 2023 Honda Civic Type R is the most powerful Type R ever    Engineered from the ground up to deliver a thrilling, addictive driving experience, both on road and the racetrack    Low and wide design is sleek and sophisticated with beautifully integrated advanced aerodynamics more >>


Renault Group reduced its carbon emissions from freight transport in Europe by almost 7% between 2018 and 2021, within the scope defined by FRET 21.    FRET21, a scheme bringing together transport and logistics players, led by ADEME and the Association des Utilisateurs de Transport de Fret (AUTF), is working to reduce the environ more >>


Nissan Introduces ARIYA to the Metaverse through electrified British art


– Space for up to seven people and two distinct interior modes- Balanced ratio of haptic and digital controls- Innovative design language focuses on reduced, simplified and highly practical shapes, the ease of use of digital technologies and material sustainability more >>


Will cheap car insurance end up costing you?


Cheap car insurance can be tempting, but it may not be the best option for you. In fact, it could end up costing you more in the long run.

Here’s why: when you buy cheap car insurance, you usually get what you pay for. That means that your policy will likely have a lot of exclusions and limitations. You may also have a higher deductible and lower co more >>


Used vehicle demand is very robust. According to Auto Trader’s Market Insights tool, used automobile searches and inquiries are up by 14% in the first two months of this year compared to the same period last year. In addition, used cars are now being sold at a quicker rate than ever before, with stock leaving spaces on average 27 days after purchase. Thi more >>


7 Vehicle Maintenance And Repair Tasks That You Can DIY


If you are a frugal vehicle owner, you may sometimes be tempted to forgo basic maintenance tasks hoping to save a few dollars. However, if you are smart about your money you would know that putting off important maintenance tasks for a long time can affect your vehicle’s life, and cost you heavy repairs in the future.
more >>


The Camo Finally Comes Off: All new Honda Civic Type R to be Revealed on July 20

The most powerful Honda-branded production vehicle ever offered in the U.S. – the all-new 2023 Honda Civic Type R will make its world premiere on July 20 at 7:00 p.m. PT. Launching in the U.S. this fall, watch the camo finally come off. Catch it he more >>


Eco-friendly design for the Dacia network


Yanmar a world-leading provider of power solutions and industrial machinery, introduces its electrification strategy for off-road vehicles and equipment at bauma 2022, in Germany, the world’s biggest construction equipment exhibition. Yanmar (stand A4.425) will sho more >>


Latest aspirated-V10 Huracán takes all its souls to drive


The Lamborghini Huracán Tecnica made its dynamic premiere on both road and circuit in Valencia, Spain at the end of June, putting the handling and performance of the l more >>


….to showcase a new individualisation strategy for high-end small-series vehicles  “MANSORY Bespoke”From now on, MANSORY offers complete customisations of all high-end vehicles from small and special series production for its more >>


Shaking up the camper market – but not the passengersThe motorhome industry is booming, with no end in sight. However, the driving behaviour of the mostly one-to-one commercial vehicle base is not always ideal for camping use. more >>


•    New on-site Stamping facility at Silverton Assembly Plant a first for Ford in SA, one of the key projects of Ford’s R15.8-billion investment in local operations


Jeep® and Juventus celebrate the tenth year of their partnership


2022-2023 football pre-season is underway and Juventus and Jeep® celebrate the tenth year of their successful partnership.    The Jeep® logo on the club’s new kit showcases the brand’s path towards zero-emissions freedom.    During this ten-year sponsorship, the bianconeri have more >>


Polestar launches 3rd annual Design Contest. 2022 edition will crown two winners – one for interior and one for exterior design.    2022 Design Contest brief is to design a Polestar vehicle that is about the experience more >>


“For us, only BILSTEIN comes into question!”For over 35 years, Wagner Motorsport from Kolbermoor near Rosenheim has been considered one of the top addresses when it comes to Porsche vehicles. The Bavarian company specialises in the repair and optimisa more >>


RENAULT SA is proud to officially announce a new partnership with young South African rugby star Aphelele Fassi.In the field of sport, we have actively identified wholesome brand partners who not only possess immense potential within their chosen field, more >>


Group set up to exploit rapidly growing profit pool with NEW AUTO strategy    Europcar will be cornerstone of new platform which will cover customers’ mobility needs from sharing for a few hours to subscription for multiple months    Two-step approach: first centralize services, then add aut more >>


Renault and the French Tennis Federation team up once more, this time for the biggest padel tournament in France, the Greenweez Paris Premier Padel Major.    Renault is providing a fleet of 20 all-new Renault Megane E-Tech electric.    Renault logo will be showing on the nets of the main padel courts. more >>


Limited Edition is Honda e to the Max


•    Designed to serve Audi drivers with vehicles from model year 2008 and onwards that do not have Audi connect installed.•    A new and free digital innovation which started rolling out to Audi owners from 1 June 2022.•    The Audi connect plug and play technology is installed on-site at an more >>


– Factory restoration for a rare super sports carWhether for its sheer horsepower, acceleration, top speed or original list price – car enthusiasts of the 1980s and 90s will certainly remember the Porsche 959 as the trump card of its time. A super more >>


With three different battery and powertrain combinations and a range of up to 329 miles and 600Nm of torque, an Ariya exists for every customer’s needs    Spacious, lounge-like and modern, with a clear connection to its Japanese DNA, Ariya offers a refined, comfortable embodiment of zero-emissions driving & more >>